Please provide your feedback in this short Flings' survey.
Previous Fling
Next Fling

Storage Simulator Using Cellular Automata is loosely based on the principles of cellular automata (CA) to model the performance characteristics of data path in a vSAN cluster. In general, CA can used to model and study any complex system with number of elements operating in parallel having short range relationships that as whole exhibit emergent behavior. When simulating a storage stack, we are modelling transmission of data blocks across a network of hardware resources communicating with each other through various interconnects. These includes processors, caches, DRAM, SSDs HDDs, PCIe links, ethernet links etc.

When modelling an IO request such as read/write, vSAN software stack applies various functions as the data block moves through this network. These functions include, data replication, parity calculation, checksum, encryption, compression etc. Some of these can lead to IO amplification.

This Fling implements a standalone vSAN simulation utility to aid developers in getting ideal speed-of-light (SOL) performance of a given cluster. This can be used as a starting point to rapidly iterate various ideas/features by making small changes to simulator and quantifying its potential performance impact. It can also be used by customers/partners to identify potential bottlenecks of their deployment under various type of workloads. 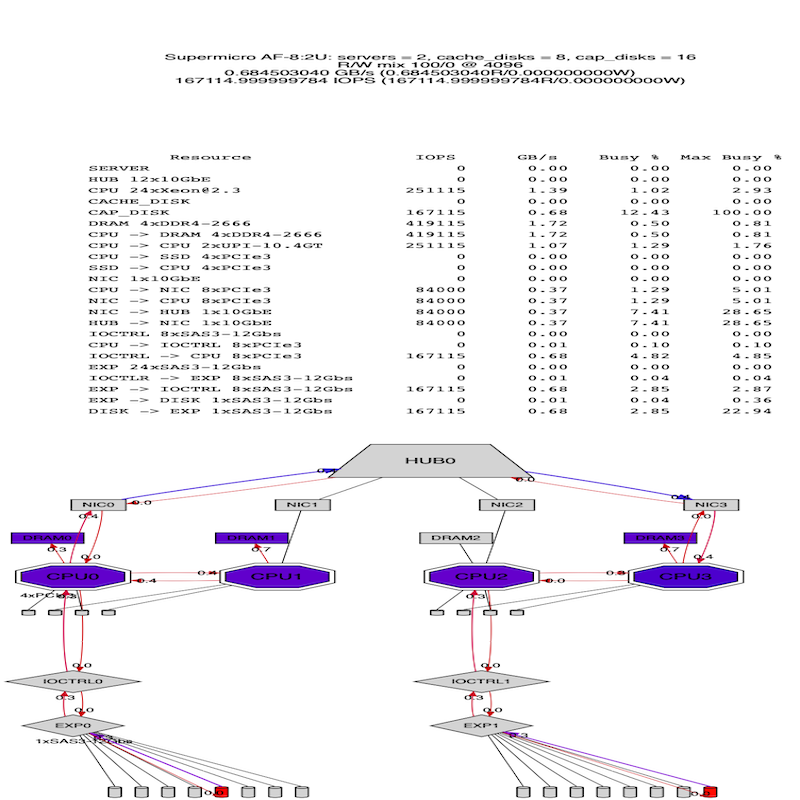 Simulator depends on the following packages

After downloading the package, run the following commands 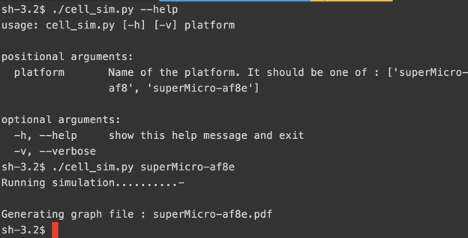 This runs the simulator for the specified platform, ‘superMicro-af8’, for a pre-determined duration on a pre-determined workload. The results of run are captured in graphical form in a PDF file, which looks like the following. This was a 2 node superMicro all-flash cluster running random read. Textual output provides cluster level stats and aggregated stats for each of hardware resource involved in data path. The graphical layout shows each resource in the data path and its relationship with its neighbors via interconnect. 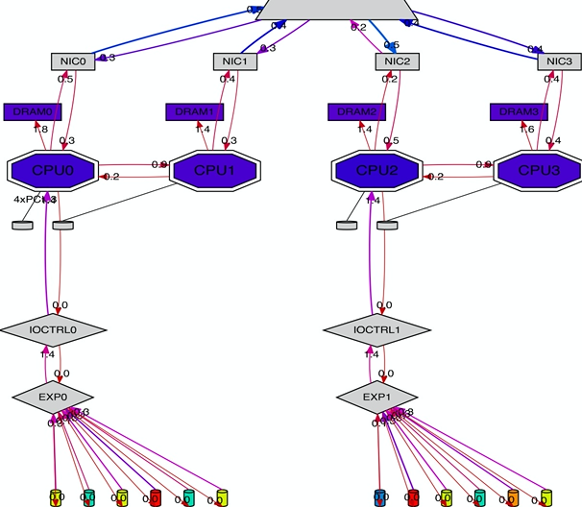 Input arguments to the simulator including platform type, number of servers in a cluster, type of CPU, SSD, workload type, duration of simulation etc. are specified via json file. These files modified and additional files can be added to test different configurations. For example, after the initial installation, we see the following directory layout: 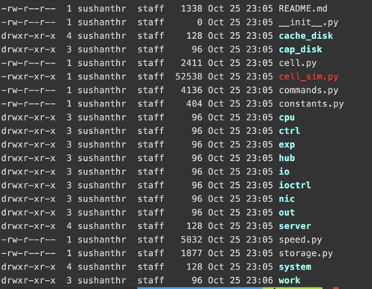 Each directory contains one or more json file(s) that describes a customizable property of the simulator. For example, if we look at system directory, we see the following:

Here we see two files, superMicro-af8.json and superMicro-af8e.json that describes the SuperMicro All Flash Model from vSAN ReadNode Portal. These are the two platforms that show up in ‘--help’ menu of simulator. If we look inside one these files, we see several key-value pairs each describing some part of that platform. In above case, physical specification of each server is described by server:sys-2029u-e2crt.json.When we look further in server directory: 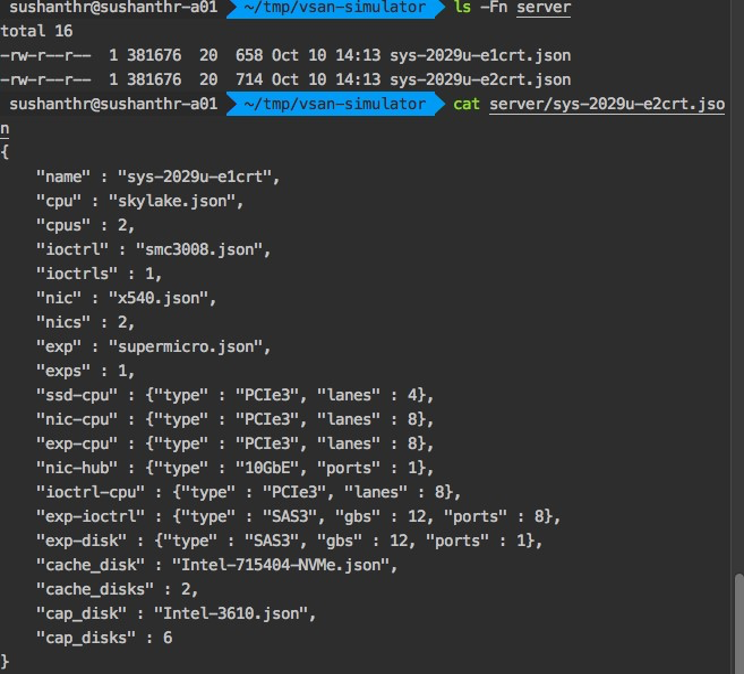 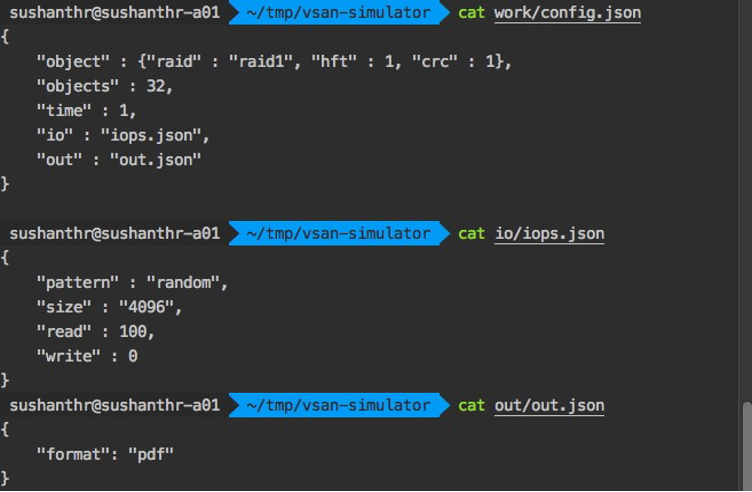 This describes simulation to be run against a RAID1 object with two mirrors (hft:1) and checksum verification enabled (crc:1). There are 32 objects involved in the simulation and the simulation is run for a duration of ‘1’ sec. Note that duration is not wall clock time. Time is measured in terms of amount of data processed by each resource the time it takes to process that data. For example, if an SSD is specified at 550MB/sec for sequential read, and if simulation needs to run for 1sec, roughly of 550MB worth of read operations would be simulated, assuming SSD is the slowest resource in the cluster. Other support object types include RAID5 and RAID6.

Apart from the object type, workload type is specified in iops.json file. In this case we are running 100% 4KB random read. The out.json file specifies the format of output file.

Any changes to the data path including feature addition or alternate methods to connect the hardware resources requires changes to the simulator itself. Most of simulator logic resides in cell_sim.py

No similar flings found. Check these out instead...

The Host Profiles CLI Fling (hostprofilescli) is a command-line utility that allows vSphere administrators to perform several operations with Host Profiles that are either not currently possible through existing user interfaces, or possible only through graphical interfaces.

This integration script between vRealize Network Insight (vRNI) and VMware HCX, allows you to streamline the application migration process.

Easy Deploy for NSX Advanced Load Balancer (formerly Avi Networks) Fling is a virtual appliance that helps you deploy Avi in a handful of clicks!

This utility allows administrators to easily apply very detailed filtering to the data and export it to a .CSV file. You can filter on time range, event severity, event source, session type (application or desktop), usernames and event types.